The travel industry seems to move in a straight line, driven by commercial needs and, supposedly, the desire to meet the wishes of the users. It’s in this context that last week Airbnb announced a radical change in its business model, a shift of focus “to making the entire trip easy and magical”. It’s a much more aggressive move than anticipated just a few months ago. 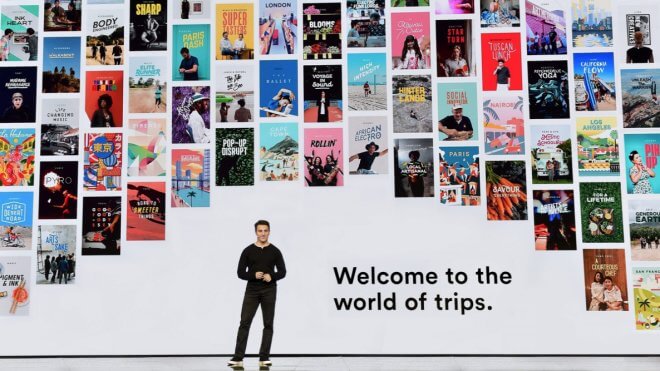 Airbnb Trips Keynote: Brian Chesky Welcomed Us to the World of Trips

Brian Chesky, co-founder and CEO of Airbnb, as a perfect novel Steve Jobs/Aladdin, welcomed us to “the world of trips”. The concept is in all respects similar to that of Google Trips, but with different assets and a greater emphasis on local experiences. Both Airbnb for Google, however, use the same three keywords: “magic”, “easy”, and “one place”. In his keynote, Chesky said:

We’ve been doing a lot of reflecting. Reflecting about what it means to travel. […] For many people travel is easy, but it’s not magical, and if you want to have an amazing trip you can literally spend as much time planning your trip as on your trip. And so, we want to fix this. We think travel can be magical and easy. Homes, experiences, and places together all in one place. Welcome to the world of trips.

The look and feel of Airbnb Trips closely resembles Netflix’s movie catalog, a staunch ally of the Western middle class in the boring evenings in front of the TV and, in fact, the vision that it expresses is quite the same: there’s an empty space to be filled with entertaining and undemanding stuff (Magical + Easy).

The only difference is that with Airbnb people have to get up from the couch. The static dimension of ordinary, everyday life and the “aggregated tourist lists that funnel people to the same places” (i.e. standard package tours), will now be challenged by a fully realistic immersion in communities around the world:

Get unprecedented access to local passions and interests, like violin making in Paris or marathon running in Kenya; discover the hidden gems that only locals know about via personal recommendations; and socialize with other travelers and locals at exciting events. Add that to three million bookable homes, and Airbnb becomes the one place to go for a truly different kind of travel experience.

Perhaps, Guy Debord can help us to interpret what we have just read and seen. In his masterful 1967 book “The Society of the Spectacle“, he argued that:

Tourism is fundamentally nothing more than the leisure of going to see what has become banal. The economic organization of visits to different places is already in itself the guarantee of their equivalence. The same modernization that removed time from the voyage also removed from it the reality of space.

The extreme trivialization of local features conveyed by Airbnb Trips only serves to encourage an impulsive consumption of experiences that leave no trace and must constantly be renewed. Let’s call it “the Netflixization of travel”.

That said, it’s totally legit that a platform which so far has given lodging to more than 100 million guests and is the subject of growing criticism, aspires to evolve and do what no one else has managed to do yet: to fix travel. No doubt they will earn even more money, but, as long time fans of Airbnb, let us express a deep sadness for the stereotypical and distorted image of travel that once again is offered to the masses, as if there didn’t exist a real and valid alternative.